In the summer of 2010, I spent 3 fascinating months as artist in residence in Timespan Museum and Arts Centre in Helmsdale, Sutherland.

Timespan’s vision focuses on linking culture, heritage, the arts, people and their ideas. My residency, exhibition and publication, Close-Knit, was the first in a series of projects using this theme and was funded by the Paul Hamlyn Foundation and the European Community Highland Leader 2007-2013 programme.

For Close Knit I focused on the home-life of the Scottish crofters in the 1800s, the history of these homes and the traditional crafts they used in their daily lives.

As part of this residency, I created a publication titled ‘Close Knit’. It is a little coffee table book for those with an interest in Scottish history, the history of the home and crafts. Full of stunning images and snippets of stories which describe what it would have been like to live in a croft house in the Scottish Highlands in the 1800s and also includes images of the works of art I produced when in residence. If you would like to purchase my publication, Close-Knit, it is available as a soft-back printed book for £9.99 plus P&P. 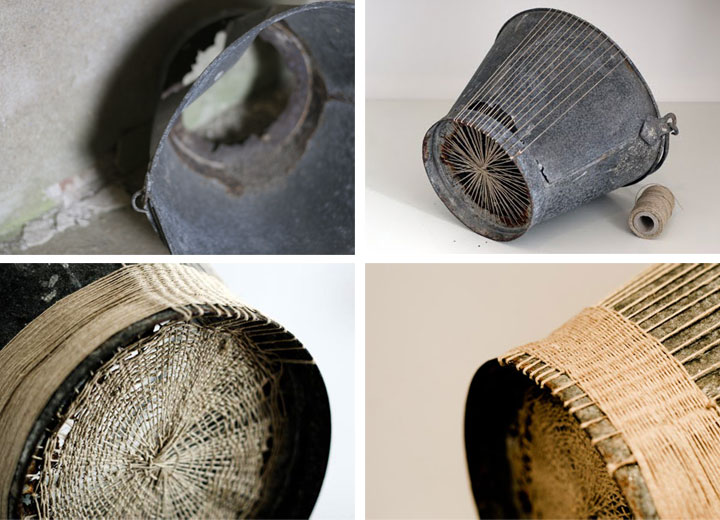 I found this bucket in one of the croft ruins in Wester Helmsdale. It had no bottom on it and a big hole in the side. The crofters were (and still are) extremely resourceful and frugal, and would mend what they could before replacing it. This bucket would have been a vital piece of equipment, so I mended it by weaving it a new bottom and wrapping the hole at the side with string. It’s now a perfectly good bucket again…for everything except liquid!…and is valued once more, transformed from the rejected to the treasured.

For Your Own Good 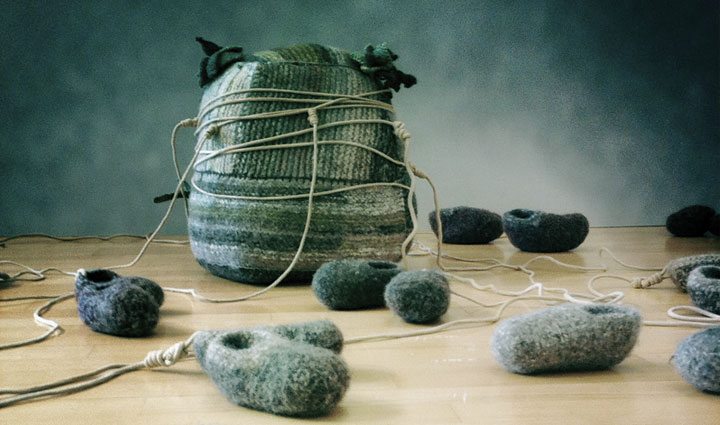 I made this work with the help of some children from the Helmsdale Primary School and the knitting group, who meet on a weekly basis in Timespan.
The knitted installation is inspired by Badbea, a deserted clearance village 6 miles up the road from Helmsdale. Though Badbea is a dramatically stunning spot, it is windswept, rocky and desperately near an extremely high cliff edge. It is said that the families were so nervous their children would accidentally fall off the cliff, they tethered them to posts and rocks while they were out playing.

The two gable ends, pictured in the light-boxes, were both found in Wester Helmsdale and are brilliant examples of the skill and creativity of the crofters. Virtually nothing remains of these crofts except for these vitally important fireplaces. But with these, we can imagine a glimpse of what it would have been like to live in these homes. The hearth was the focus of indoor family life, around which the whole family would spend their evenings. The crofters would never have let the fire go out. For this work I installed warming flowers and smoky grasses, in order to recreate that focus point and create a ‘memorial’ for the heart of these homes. The space in which these works were housed was the same dimension as a croft. 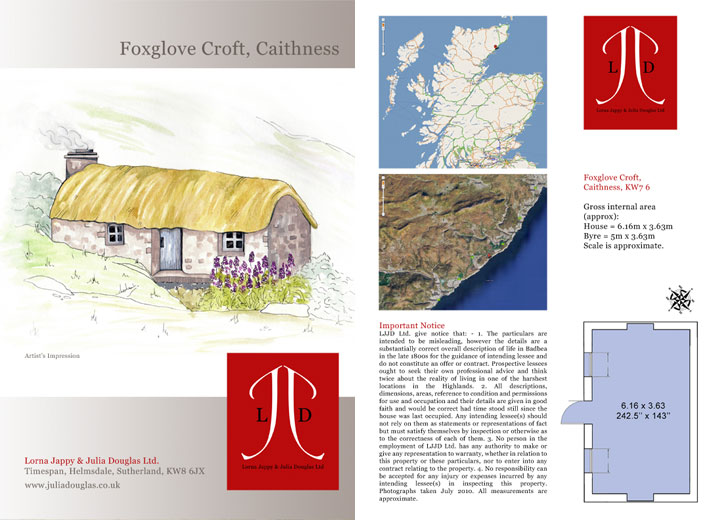 Made collaboratively with Lorna Jappy

This spoof Estate Agent’s document aims to sell the idea of living in a croft in Badbea, a deserted clearance village 6 miles up the road from Helmsdale, whilst, at the same time, describing what it might have been like to live in one of the most challenging clearance sites during the 1800s.

‘Now on the market for the first time a unique opportunity to choose to live in an area of outstanding and dramatic natural beauty. Situated in the pretty crofting township of Caithness and benefiting from easy access to Helmsdale and Berridale, the subjects for rent comprise of a traditionally built stone croft house, built around 1818, standing in a generous garden area extending to 3.5 acres. The Old Croft House was last occupied some 100 years ago and the way of life there is much unchanged.

The property is in need of structural improvement, though retains its fireplace and part of its stone walls. This will allow for personalisation, such as the option to add your family’s rooftree. Access to the property is either along the footpath, through a kissing gate, off the township road across to the rear of the subjects or along an ancient coach and droving track from Helmsdale, above sheer cliffs, rock strewn beaches and hidden bays. This property is south facing with spectacular easterly open sea views. The ruins of the byre are included in the lease, located at the east end of the house.’

The full document is included in the publication, ‘Close-Knit’, available for iPad or in hard copy. See details at the top of this page. 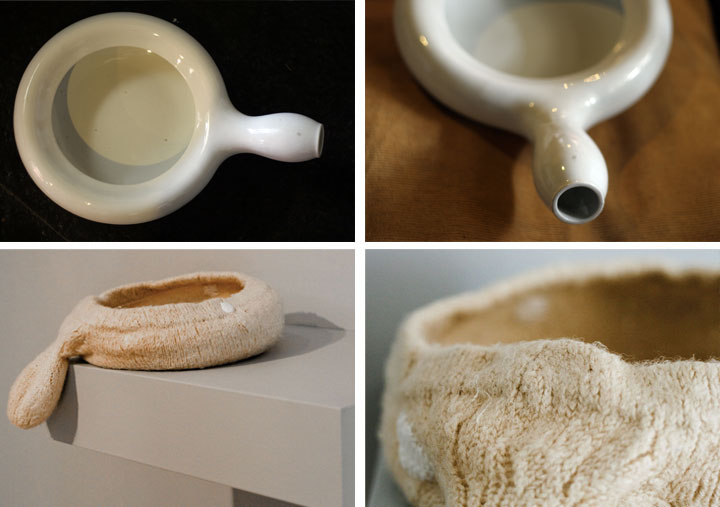 The Old Chanty is a knitted bedpan, designed in the style of one that would have been used by an old or sick man who had taken to his bed. A little worse for wear and bearing the scars of its life, not functioning quite as well as it once would have, but still loved and cared for.