The Obituary of Becca Douglas Usher 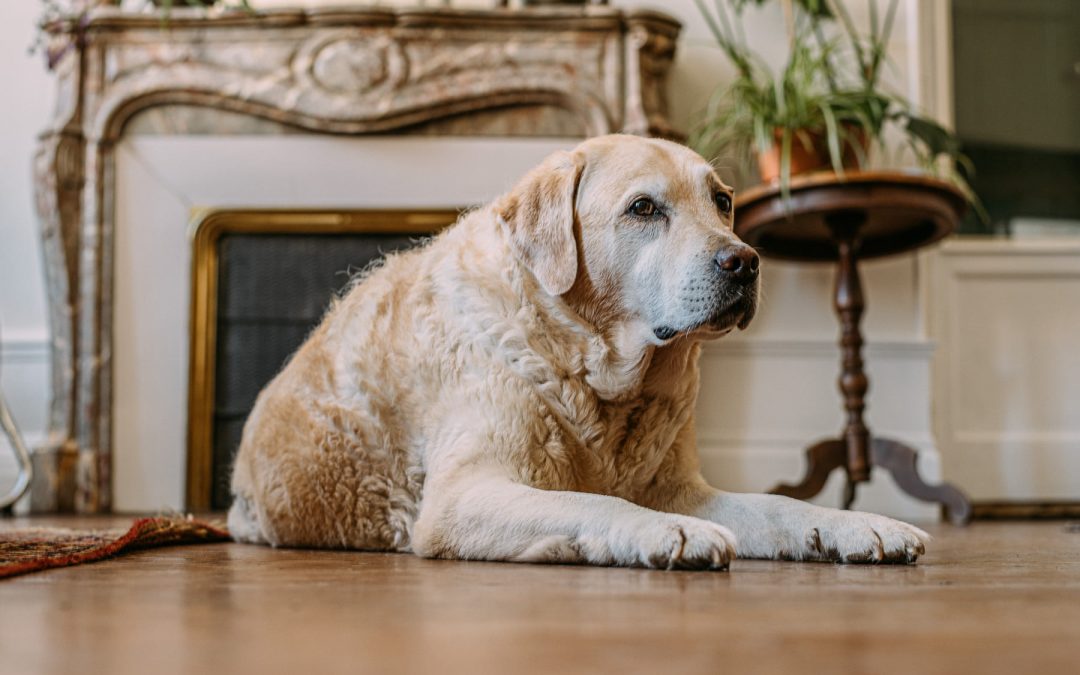 To describe a dog as witty seems rather unusual, however, this is the first word that springs to mind when I think back over the life of Becca Douglas Usher. She adored making people laugh, displaying this joy by going circular with her tail whilst sneezing and bobbling her head from side to side!

Her favourite game was ‘The Chase’, at which she excelled. To catch her and get something from her she coveted (ball, apple, section of dead animal) was absolutely impossible, coining phrases such as ‘Bend it Like Becca’ and ‘Heavens to Beccazoid!’

Her beauty wasn’t only her wit and intelligence though, oh no, this was one good-looking Labrador! This wasn’t purely by chance. Her Auntie was ‘Best in Show’ at Crufts and, hoping to achieve a similar accolade once more, Becca’s breeder carefully selected two puppies from the litter for consideration to be kept to train for show. She carefully marked each of these with pink nail varnish on their ear. This mark was clearly visible on the day we met. 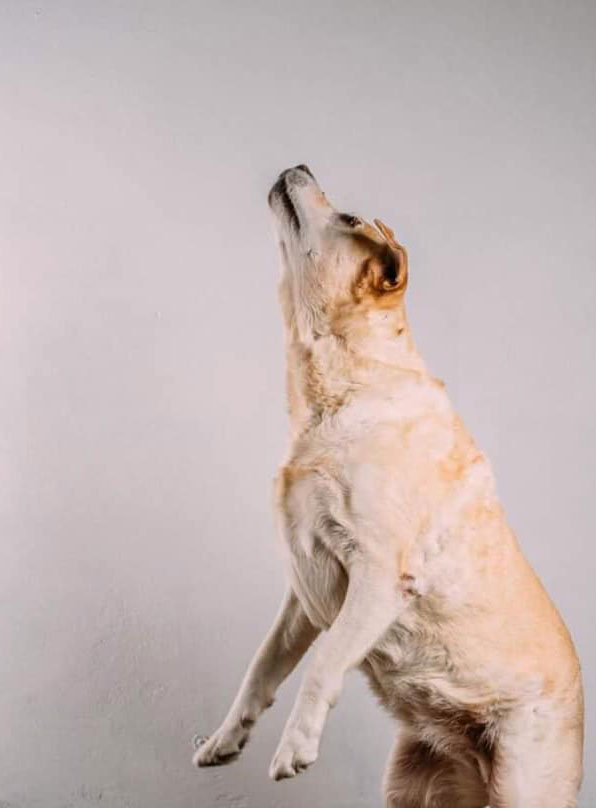 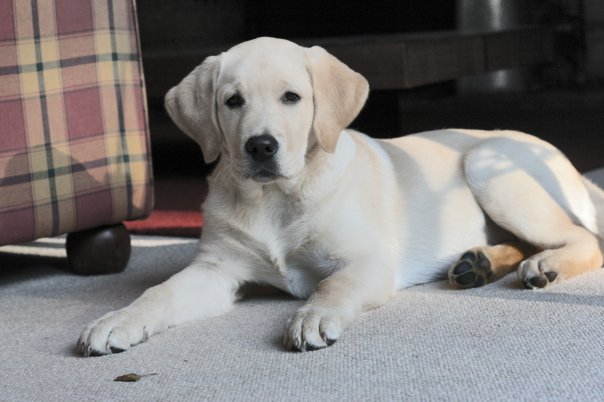 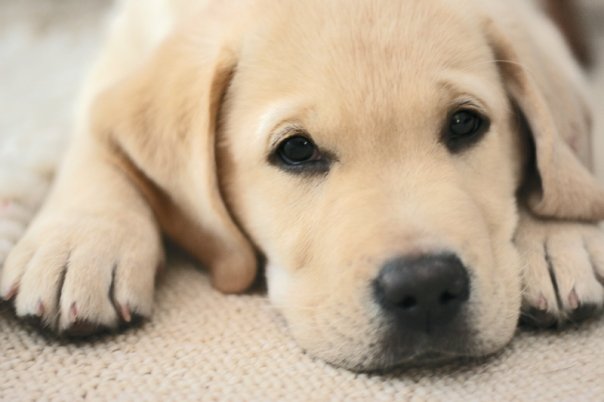 Knowing what we know now, I think the breeder made the right choice, as Becca would have made a terrible show dog! I mean, does this look like a dog show winner to you? 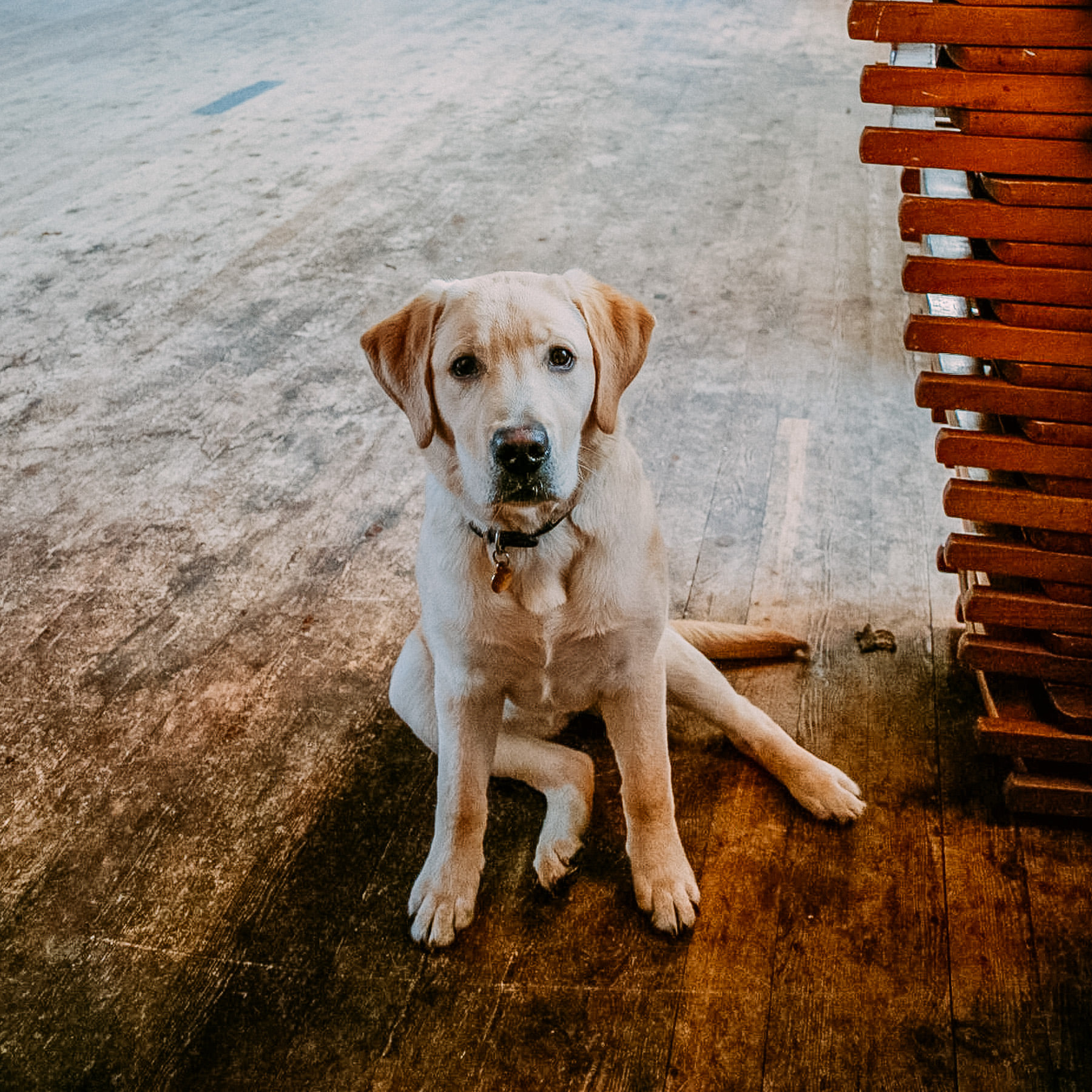 The day we met, our intention was just to have a look at her for consideration. We had no bed, no bowl, no blankets, no dog food and very little money! I’m sure this is a common story, as I doubt many people can walk away from a puppy they’ve immediately fallen in love with? Before we could think about it too hard, we had completely emptied our bank accounts out and purchased a terrified wee puppy for a small fortune and were driving home with her, wandering what the hell we’d let ourselves in for.

She was a nightmare!

It took about two and a half years for her to calm down, give us a moment’s peace and stop eating everything!

From then on, we were family and twice weekly trips to the beach and holidays to locations with great walks became the highlights of our lives. 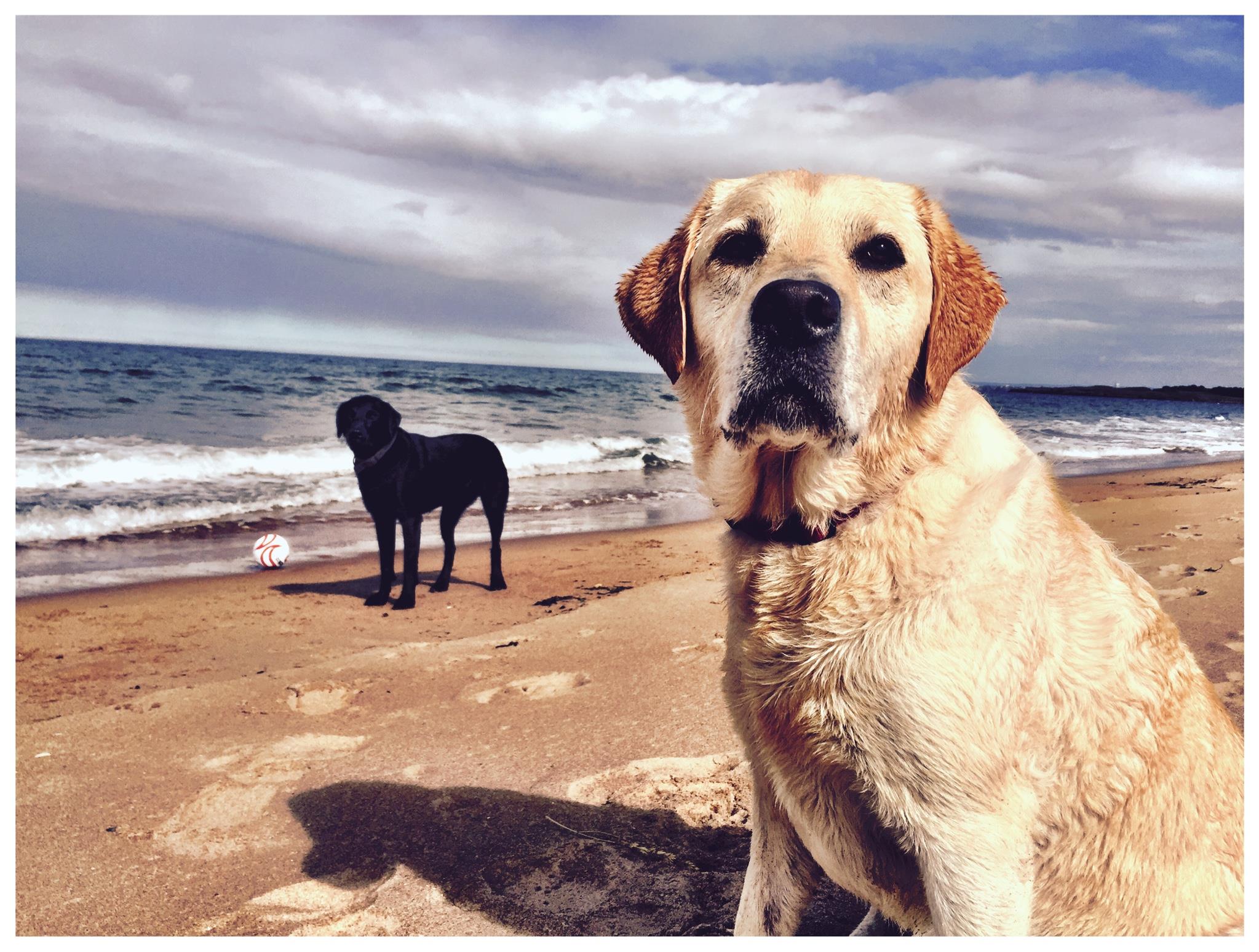 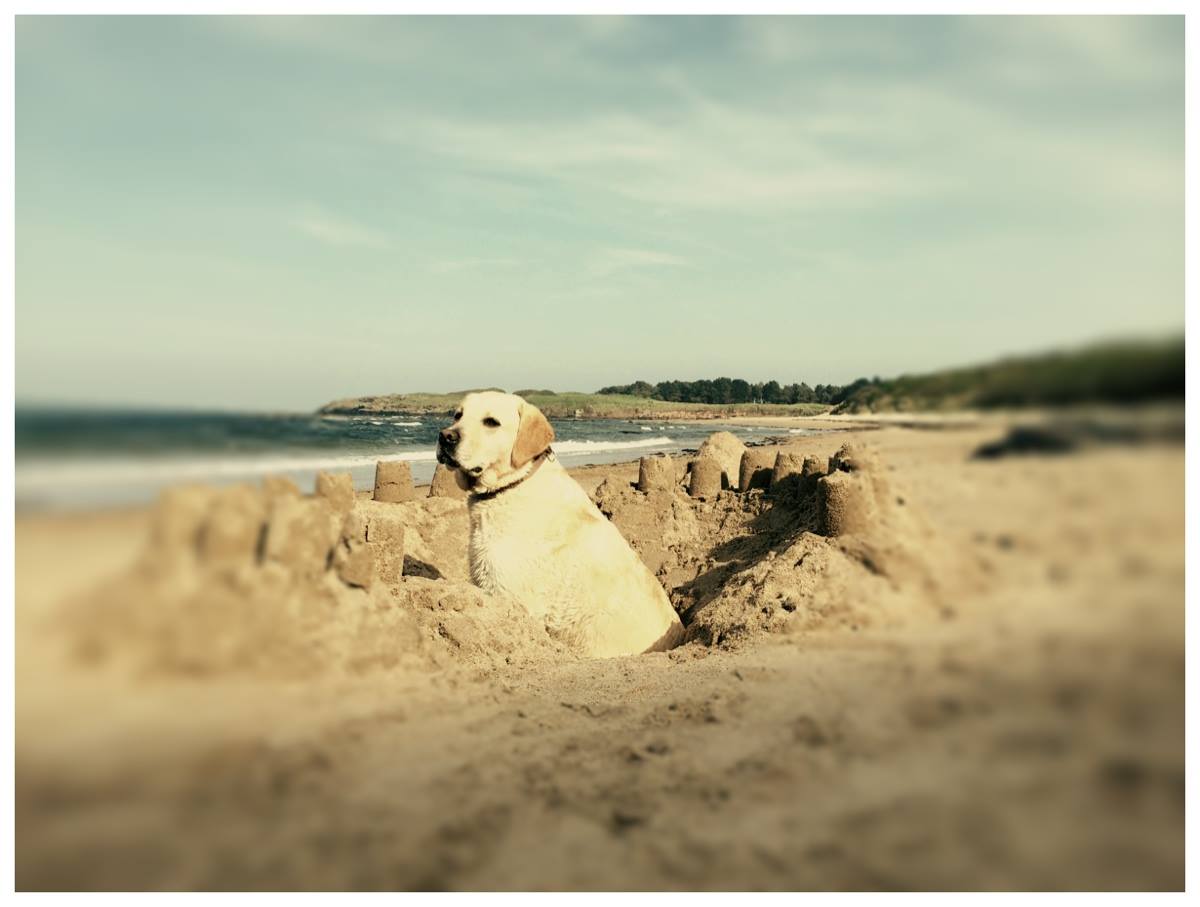 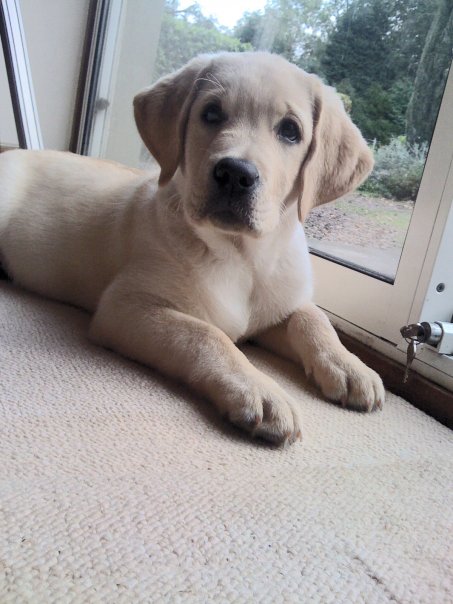 Becca’s good looks attracted attention wherever we went, but it wasn’t just for her beauty she was admired. Once we took a trip up to Aberdeenshire for a holiday when she was about six months old, a farmer in the bar asked us how much we wanted for her, seeing her potential as a working dog, after exclaiming ‘Look at the paws on that!’

Though her virginity remained intact to the end, she did find romantic love when Dougie came along in her fourth year. From then on Dougie tried it on daily with Becca, usually when he wanted her to chase him (she was the master chasee though remember and not particularly interested in this role reversal) and always when visitors arrived at the front door, much to our embarrassment.

Though Dougie never did actually succeed to mate with Becca, he has remained faithful as a ‘only one-bitch for me’ kinda dog to this day. 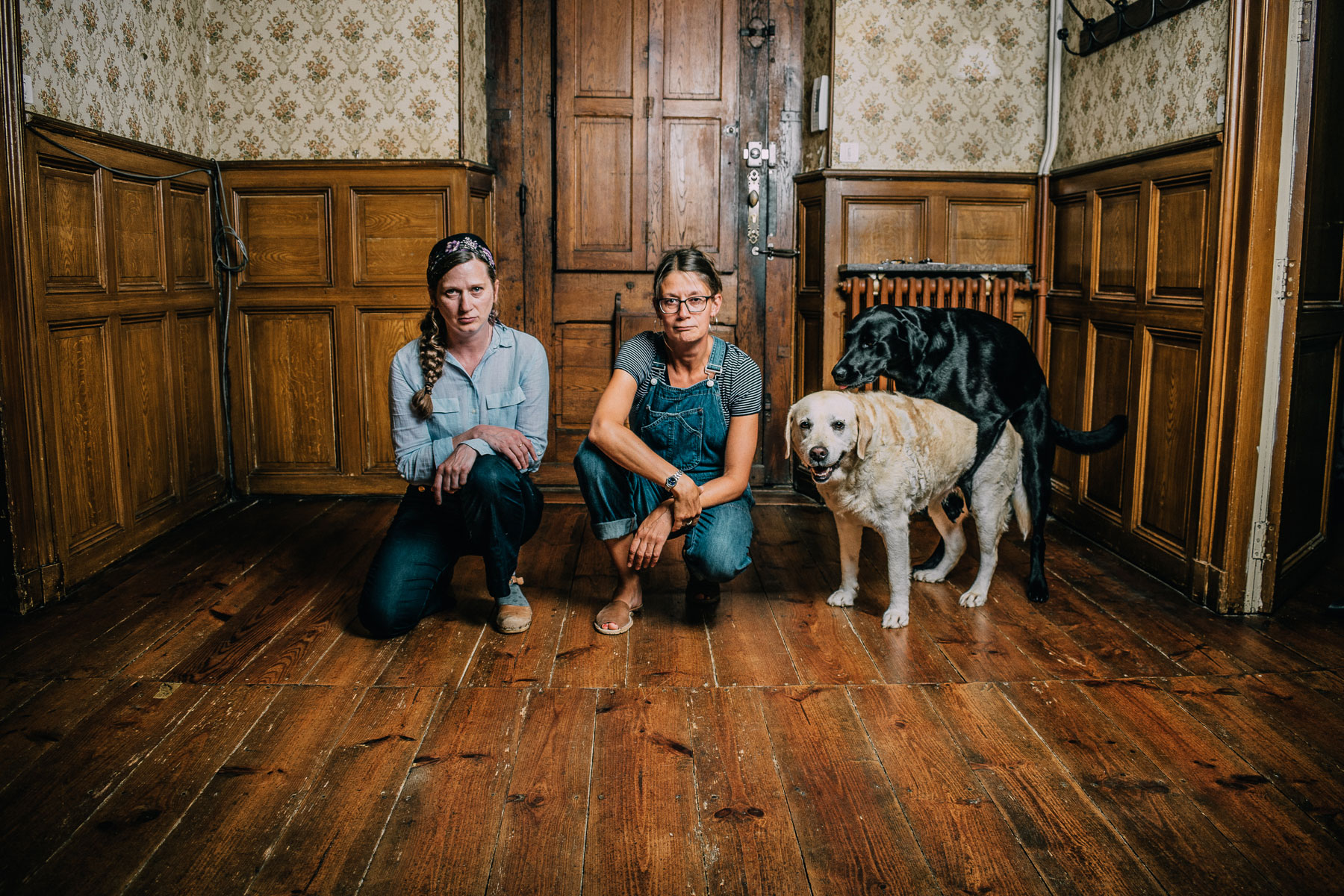 Not many people will be interested to read the obituary of someone else’s deceased pet. So many of you will have experienced your own grief in losing an animal you have loved dearly. But if you have made it this far into my post let me share a warning with you, dear animal lover, breeding dogs for show means breeding pure breeds and, in Becca’s case, this led to all manner of health issues, from skin allergies (caused by dust mites and storage mites, amongst other things) to stomach weakness (She had gastroenteritis at least five times!).

When her first cruciate ligament tore, in her third year, we were relieved that we had good pet insurance, as this meant she could have weekly trips to the local Canine Rehabilitation Centre. By the time her second torn cruciate ligament had healed we had maxed out our insurance to the tune of £7,000 in just two years.

I went to the vet so often with her that I could virtually say ‘Hiya, it’s me’ when I called for an appointment (and I’m certain the vet started planning their next holiday every time we showed up!).

Becca came to think of a visit to the vet as a trip to a luxury spa, with the routine being: massage, followed by walk on the underwater treadmill, followed by biscuit. What’s not to like?

She loved the vet’s so much that one vet even commented that he had never met a dog before who wagged her tail even when she was getting her temperature taken! 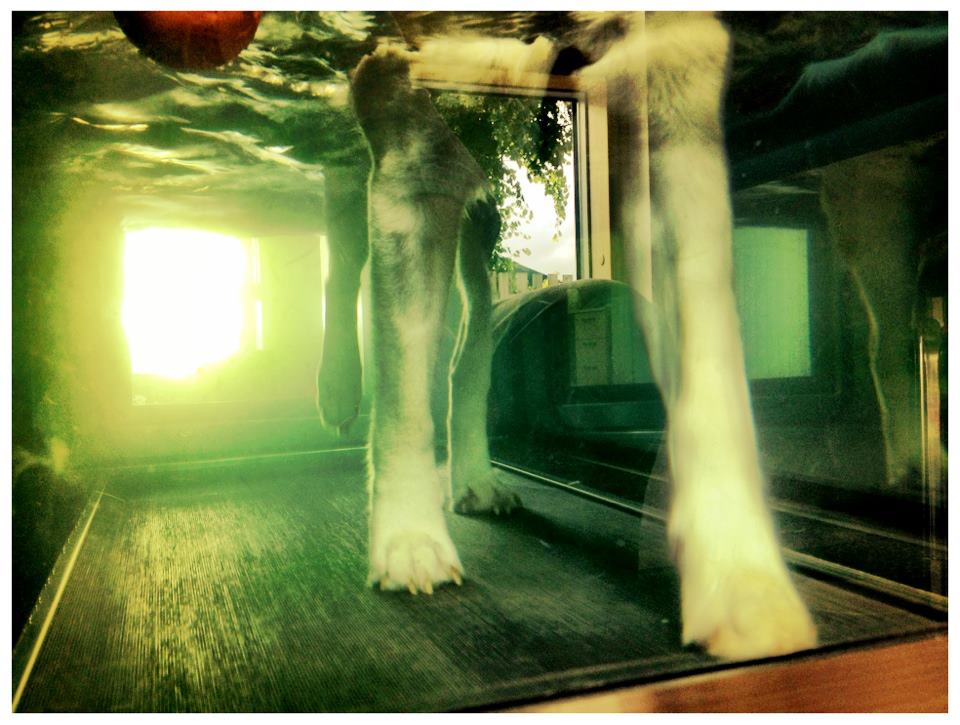 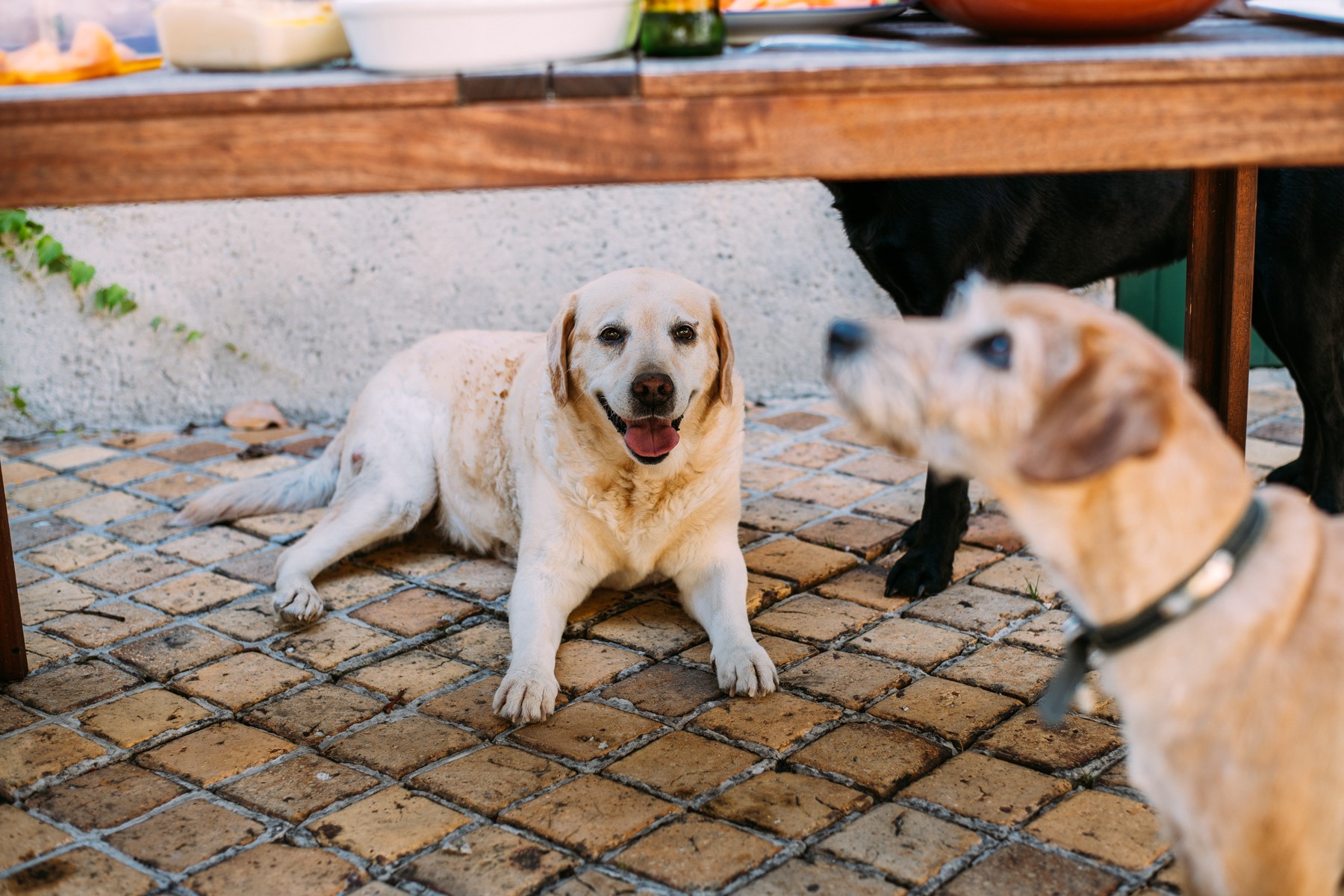 Though she often suffered with her physical health, she never complained and, even in her final weeks when the pain must have been intense, she never whined nor asked for anything other than our presence and a fan to keep her cool.

We will never know exactly what she died from, but we feel fortunate that her suffering didn’t last too long and that she died a natural death, in her own garden surrounded all that day by only her family and in the arms of Colin, her no.1 Master who she adored.

We feel a huge loss and an ache in our chests.

We also feel grateful to have had her in our little family for thirteen years. 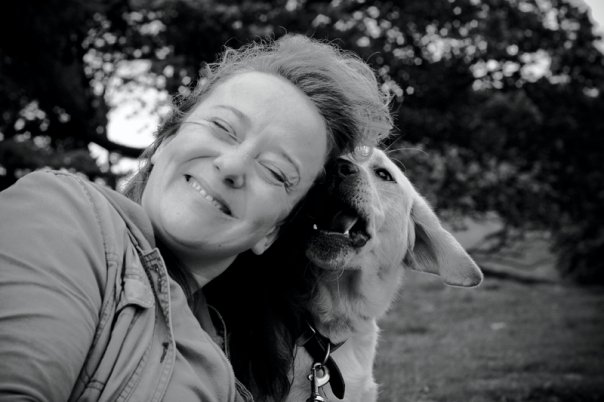 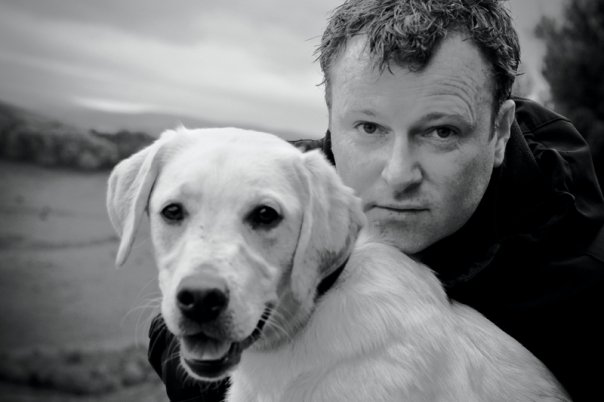 Photo credits: All the good photos: Colin Usher. All the others: me. Featuring Jutine, Vicky and Boots the dog.